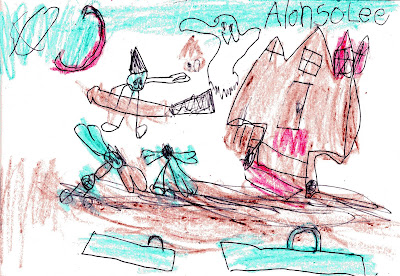 Making your mark on the world is hard. If it were easy, everybody would do it. But it's not. It takes patience, it takes commitment, and it comes with plenty of failure along the way. The real test is not whether you avoid this failure, because you won't. it's whether you let it harden or shame you into inaction, or whether you learn from it; whether you choose to persevere.

Posted by Heckit at 8:24 PM No comments:

So in order to build relationships in my ALD class, I thought I would implement a lesson I learned in an Equity PD. Individuals pair up and for one minute each one has the opportunity to answer the question: Who are you? As you go to other individuals, you cannot state anything you have said before. It causes one to be more thoughtful and dig deeper to share. I thought it was a useful strategy to try in the classroom.

Unfortunately when I tried it, it didn’t go as smoothly. By the second person, I had one student crying and two others were playing around.

I was away the following day and the sub had written that the class was “horrible”. That night I pondered how to proceed to create community. I decided that it might be good for the students to first write it out and then share. That morning I wrote out mine response to “Who am I”. I would make myself vulnerable to my students by outing myself—I was desperate to connect to the class.

My second paragraph was about living in San Francisco, about studying art, about teaching at Flynn.

My third paragraph was about my identity:

Who am I? I am a single man who lives with my brother. I am Mexican-American, Chicano, Latino. I am a gay man. I am Christian Catholic who believes in God. I am teacher who is thrilled to see children learn and advance. I am an artist who tries to find time to write, draw, paint, take photos. I am a cook and baker who loves chicken tika masala, mole, Chinese basil chicken and pho. I am a runner who loves running every day.
I am many things. I change every day.

The students didn’t miss the reference to sexual orientation. They looked at each other wanting to confirm what they heard.

I responded, “ I am attracted to men.”

There were snickers and laughs but most of the students were respectful or nonplused. J said, “That was brave.”

G asked, “Have you kissed a man?” I responded affirmatively. G reiterated, “You made out with a man?”

I responded, “Just because I disclosed I was gay, I still have a right to privacy. And while you are free to ask me questions, I have a right to not respond to or to ignore questions that are inappropriate or violate my privacy.”

I asked the students if they knew gay people. A third raised their hands. I asked if they considered those people their friends—a couple hands went down.

I told them that I disclosed this because out on the playground I hear students demean each other by calling each other “faggot” or “gay.” I told them that that hurts me because it is like using racial or ethnic epitaphs. I related to them that as a child kids would call Mexicans “beaner” or “wetback” as a way to belittle them. It is similar to what I hear on the yard. Most of my students were respectful of my outing, a few were uncomfortable and one was nonplused.

One young girl was both curious and respectful about my disclosure as witnessed by her questions:

I am attracted to men. Just as you have people to whom you aare attracted to and are your friends. There are others to whom you are not attracted to. It doesn’t mean they are any less or greater, it just means that you like some people more than others.

If you had a choice to be straight or gay, what would you choose?

I would choose to be gay because that is the way God made me. There are many things about me that I cannot change and I have to love all of me. I have to rejoice in who I am.

How long have you been gay?

Mr. Lee you confided this to us. Do you want us to keep it confidential?

I chose to tell you this because it is the truth and I trust you. You are welcome to share this with others. I just ask that you share it in a way that respects me and you.

Though the day of the several students who asked me if I was gay, only one was inappropriate but I think it is because he doesn’t have the language to ask about something so private. Most were OK with it.

One boy asked me, “Mr. Lee, I heard that you are attracted to men. Is this true?”

He pushed up his lower lip, smiled, nodded and walked away.

Why? This was an attempt to self-disclose; to be vulnerable to we may learn about each other. The only way to build trust is when we know the values and dreams and burdens our companions carry and that we might feel compassion for one another.

I also think that the homophobic slurs that occur on the yard and to each other has got to stop. I realize that it may come from a place of ignorance or may conjure images of submission.

But I think children need to know gay people. They need to feel comfortable and know that gay people are not necessarily drag queens or leather buddies but are teachers, people of color, Christian—regular folk just like them.

Posted by Heckit at 9:08 AM No comments:

It's all about relationships!

I had a community meeting with norms and asked the group: “What can be done so people get along?” They came up with 1. Have more fun, games and activities. 2. Mutual Respect: a list of NOT rules: no capping on each other, no calling each other names, etc, and 3 Caring for each other—helping each other out, knowing each other. The process went OK, but I came to a fundamental insight: it is all about relationships.

Instead of a group of people working towards a common goal we were antagonizing each other which was depletive (teacher v student, students v students): Not all students but enough to warrant a reappraisal of the dysfunction in the classroom. Either we work together or we work against each other. 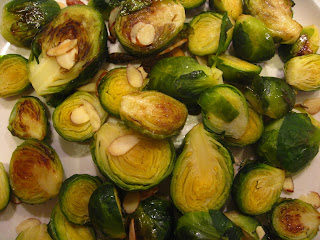 I tell that I like all food except brussel sprouts and Rice-a-Roni.

I first tried brussel sprouts in junior high and found them bitter and disgusting. When I lived in New York in my mid-30s, I thought I would try them again after seeing them in a farmers’ market. I brought them home and boiled them whole. I found them hard and unpalatable. I swore them off.

After seeing a recipe in Sunset Magazine recently, I decided to try them once again. The recipe called for them to be trimmed, split and boiled for 5 minutes. I drained them and placed them on a baking sheet. Then they were drizzled in olive oil and sprinkled with capers and almonds to be baked for 20 minutes. Veggie heaven.

Posted by Heckit at 8:57 PM No comments: